Why bother fighting over features in browsers when you can decide using some hard facts?

I had recently managed to make Firefox work for me (it still isn’t as fluid as Chrome, but is now close, thanks to using the beta version which has e10s support). Still confused about whether its really better than Chrome, I decided to put them to the test!

Since majority would come here for the results, well…

Firefox wins hands down here. Personally, this was not a surprise.

Chrome was always know to be a RAM hog, but it also seems to have a huge lot more power usage as compared to Firefox as well.

Update I’m back to Chrome these days. I noticed it works much more smoother, and hangs much less often.

Not a new thing, but yes, Firefox uses lower RAM than Chrome consistently. For description of the actions during the course of the benchmark, look at the next section.

Don’t laugh at the plot :P

Also, the higher one is Chrome, although it’s not apparent.

I measured the power output of my laptop’s battery while doing various actions on both browsers, and Firefox again demonstrates much lower usage. Really good for people who keep running out of battery and complain they cannot figure out the reason (Yes, I’m also talking about myself). Firefox, good job there! 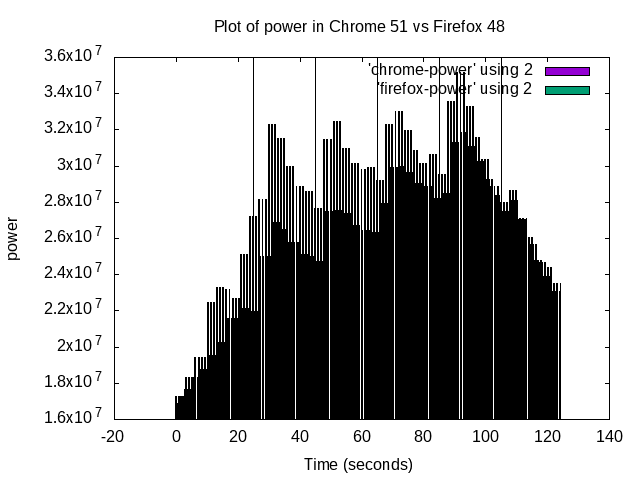 I designed a casual benchmark for testing the browsers’ resource usage.

Here’s the timeline of the benchmark:

NOTE All videos were running simultaneously by 85 seconds. No tab was closed prior to 105 seconds.

I executed these exact actions on both browsers, taking care to start with exactly the same conditions in both experiments.

NOTE I left ad-blocker running in both the browsers since Ads would just introduce variability and delays in video starts.

Here are the links used for the experiment:

Here is the script used to record the data. Feel free to test it on yours as well.

The output data files were of the format:

The (below-par) script used for plotting the plots is here. It takes as argument the 2 files (like: chrome-ram and firefox-ram).